The weakness in the WPA2-PSK system is that the encrypted password is shared in what is known as the 4-way handshake. When a client authenticates to the access point (AP), the client and the AP go through a 4-step process to authenticate the user to the AP. If we can grab the password at that time, we can then attempt to crack it.

In this tutorial from our Wi-Fi Hacking series, we’ll look at using aircrack-ngand a dictionary attack on the encrypted password after grabbing it in the 4-way handshake. If you’re looking for a faster way, I suggest you also check out my article on hacking WPA2-PSK passwords using coWPAtty.

Let’s start by putting our wireless adapter in monitor mode. For info on what kind of wireless adapter you should have, check out this guide. This is similar to putting a wired adapter into promiscuous mode. It allows us to see all of the wireless traffic that passes by us in the air. Let’s open a terminal and type:

ote that airmon-ng has renamed your wlan0 adapter to mon0.

Now that our wireless adapter is in monitor mode, we have the capability to see all the wireless traffic that passes by in the air. We can grab that traffic by simply using the airodump-ng command.

This command grabs all the traffic that your wireless adapter can see and displays critical information about it, including the BSSID (the MAC address of the AP), power, number of beacon frames, number of data frames, channel, speed, encryption (if any), and finally, the ESSID (what most of us refer to as the SSID). Let’s do this by typing:

Step 3: Focus Airodump-Ng on One AP on One Channel

Our next step is to focus our efforts on one AP, on one channel, and capture critical data from it. We need the BSSID and channel to do this. Let’s open another terminal and type:

As you can see in the screenshot above, we’re now focusing on capturing data from one AP with a ESSID of Belkin276 on channel 6. The Belkin276 is probably a default SSID, which are prime targets for wireless hacking as the users that leave the default ESSID usually don’t spend much effort securing their AP.

How To Kick Someone OFF your WiFi Using Kali Linux 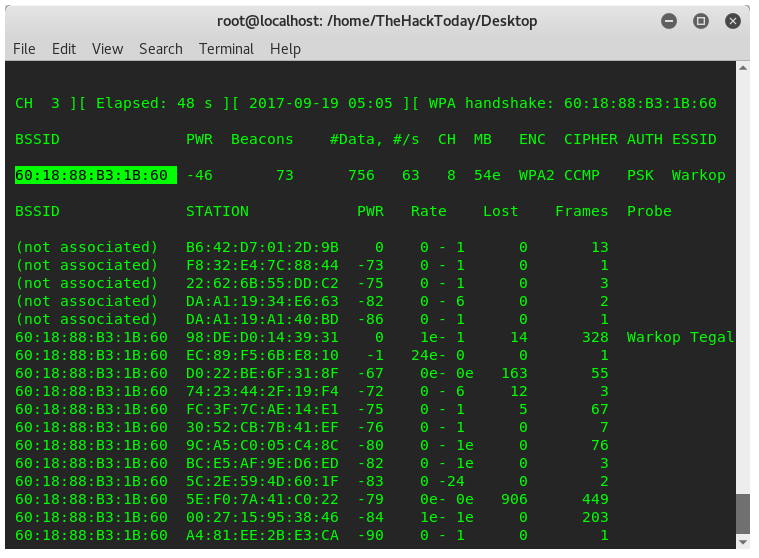