A “small group” of Twitter accounts has been the target of state-sponsored trying to obtain sensitive information hackers, the network said yesterday. Twitter issued an alert telling users to select hackers he had tried to access their accounts, explaining that the attackers were probably you state sponsored.

This is the first time that Twitter has issued such caveat.

“As a precaution, we are alerting their Twitter account is one of a small group of accounts that may have been targeted State-sponsored actors. We believe these actors (probably associated with a government) may have been trying to get information like email addresses, IP addresses and / or telephone numbers directions, “said the warning. However, the warning said it was unlikely the attack It was successful. “Right now, we have no evidence they got their account information, but we are actively investigating this matter. We wish we was more we could share, but we have no additional information, ” the message said.

In fact, Twitter did not provide any details about who is the hackers were or what government might be associated with.While this is the first time that Twitter has published awarning about state-sponsored attacks, this incident is the latest in a growing list of actions the government affiliated hacking

Also Read: CSA IN TALKS WITH FACEBOOK OVER HACKING

Twitter’s notice is the latest amid concern about cyber attacks by state-sponsored organizations. Government agencies, businesses and media have all been hacked.

One organization that said it received the notice, a Winnipeg-based nonprofit called Coldhak, said the warning from Twitter came on Friday. The notice said the attackers may have been trying to obtain information such as “email addresses, IP addresses, and/or phone numbers”.

Coldhak’s Twitter account, @coldhakca, retweeted reports from a number of other users who said they received the notice. Coldhak and the other users did not indicate why they may have been singled out.

Colin Childs, one of the founding directors of Coldhak, told Reuters his organization has seen “no noticeable impact of this attack”.

How to Boost your Followers and Likes on Instagram?

How Fake News Sites Operates, How They Make Money? 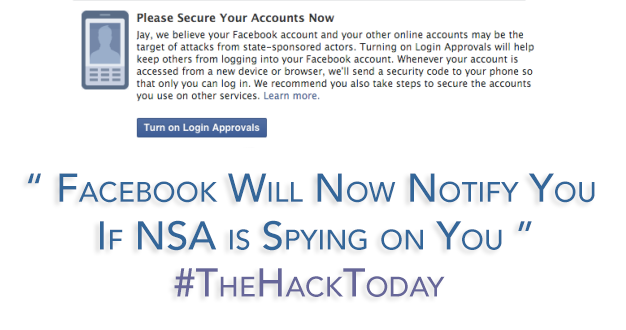 Facebook Will Now Notify You If NSA is Spying on You